“Love not hate, that’s what makes America great!” Can you feel the tingle people? Rolling down Broadway with 60,000 of my fellow disgruntled Americans yesterday definitely improved my buzz. The potholes were hell, but all for civic duty.

What can I tell you? I would hate to be the guy who pissed off all those women.

Hands too small to build a wall.

Keep your bitty mitties off my healthcare, my privacy, my rights, my ass and Planned Parenthood.

Can I have a hell yeah. All those grandmas and babies wearing pink pointy hats was a welcome sight for bloodshot eyes after all that doom from Donnie Darko.

Some things are just so obvious. “I’m only 4 years old and I know everyone is equal,” for example. And that kid over there pointing out that Trump is a weenie.

Yours Truly,
The Severed Head

Lose the face mask, add a combover, you get the gist 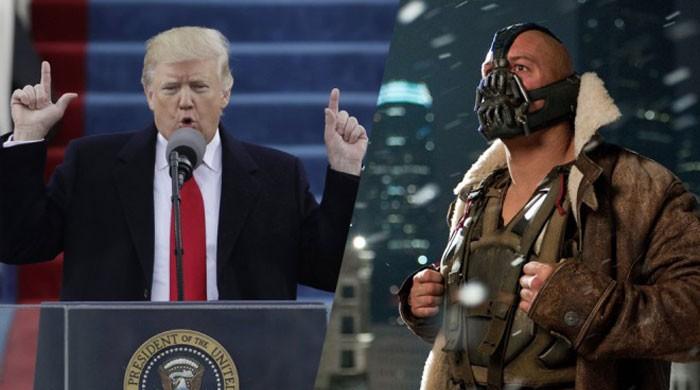 Would somebody please flip on the lights! I can’t see my fair America for all the fog and carnage and dilapidated infrastructure kicking up dust. Reminds me of the London smog of ’52 back when I hacked up my first lung. Only we can’t blame this one on God.

If you thought the arc of history bent toward justice, even just a little bit, here comes Donnie Darko to set you straight, descending from the Mount with a scowl and red tie, channeling the super villain Bane.

You can’t make this shit up. The Dark Night Rises. As Deepak Chopra said, confront your shadow people, this is your life.

“We take Gotham from the corrupt! The rich! The oppressors of generations who have kept you down with the myths of opportunity, and we give it back to you … Courts will be convened. Spoils will be enjoyed. Blood will be shed. The police will survive, as they learn to serve true justice. This great city… it will endure.”

Lose the face mask, add a combover, and you get the gist of Donnie Darko’s triumph-a-trump inauguration speech.

Just don’t think about those corrupt, rich, oppressors of generations tapped by Donnie Darko for the Swamp Creature Cabinet. Seriously, don’t. even. think about it.

And no need to watch the speech either, I’m here to report:

Move along people, nothing to see here. History will not be our guide.

Meanwhile over in Moscow, YUGE celebrations in the streets. Or so my sources tell me. But damn, Melania looked hot in that dress!

Thank the gods I have a fresh six-pack. This party is just getting started.

Yours,
The Severed Head

It’s T-Rexxon versus Cruella DeVos for Swamp Creature of the Week! Make your bets here in bit coins. I may be late to the gate but I’m ready to roll, straight to my destiny. I’m not gonna lie, I’ve been on a two-month bender since the election of He Who Won’t Be Named (since I haven’t yet chosen a name), so bear with me. I’m dusting off the gutter slime and getting back in the game.

If you’re not familiar with my ways: I was big in the 90s when I won all sorts of awards for my biting commentaries on local politics in a small mountain town ruled by developers and encroached upon by corporate overlords – remember the Vail Devil? Hey it’s everyone’s story, and things don’t really change.

Except, holy crap! I took a couple decades off rolling down mountains and reporting secret real estate deals only to lift my ragged neck and find this mess! You need me people, you really do. I’m here to tell it like it is.

Last week was some kind of hell. I got a bad case of whiplash trying to track that 10-ring circus now playing in a Senate ballroom near you. You know what I’m talking about: the Swamp Creature Confirmation Hearings.

I wracked my gin-fuzzed brain trying to decide which way to spit my venom and who was worst. Then it hit me: stamina, people. It’s only the opening credits of this blockbuster franchise. The greatest show on Earth, you could say, in an every Marvin villain heads to Starkiller Base for the final showdown kind of way – episode 1 of way too many.

Pass the popcorn laced with Xanax.

Where else to begin but T-Rexxon Tillerson, that titan of Big Oil and his $182M parachute casting their shadow on the US State Department. Because why not represent our country to the world with the Exxon Mobile CEO who led the charge for climate change denial. During the hottest years on record no less.

Greenpeace and Code Pink are freaking out, bless their commie hearts. Even the Republicans are having a hard time warming up to that Putin Pal. But forgive me if I got distracted by that sideshow Smarmy Sessions, joking ‘bout the Klu Klux Klan, unfit for federal judge but ready for the job of America’s top cop.

Forget that Black Lives Matter stuff, and voting rights whatever. In the words of Senator Smarmy, let’s not shove civil rights down the throats of people. But hey, he had a black friend once, so maybe it’s no big deal.

Who’s ready for the bar? Well save some outrage for this dog and pony show: Fast Food Pudzer, foe of the minimum wage and habitual labor law violator, licking his chops at the Labor Department; Pompous Ass Pompeo, Monsanto’s man in the House, trying to make sense of why he should lead the CIA; and Sue-the-EPA Pruitt, that vicious critic of environmental protection, gnawing his bone at the prospect of running the EPA. Running it into the ground, I’m guessing.

Don’t get me started on Rick “I don’t know what the Energy Department does” Perry. Where else could they put him to maximize bad press? IDK Perry is sorry, according to the New York Times, that he ever called to abolish the office in charge of nuclear security, since he didn’t know what that office actually did, but now that he does know, he wants to lead it!

Dust out those bomb shelters, if only to hide from all this embarrassment.

And yet, and yet, I wracked my knotty head the most – the most! – at the specter of Cruella DeVos, that billionaire hater of public schools trying to get her mitts on our nation’s education system. Something about that pasted-on smile as she failed to answer basic questions about schools, fairness, decency and other things that matter to, you know, parents.

In case you missed the performance, you can catch the “head scratching” highlights right here. And if you’re saying WTF right now, just remember, her family may or may not have given $200 million to the Republican Party, she just can’t say for sure.

My head is pounding, excuse me while I gin up a shot of tequila and try to wrap my brain around the next horror show: Forclosin’ Mnunchin, ex-Goldman-Sachs-banker-turned-Hollywood-producer, trying to charm his way to the Treasury Department.

Don’t be fooled by the Magoo glasses and aw-shucks demeanor; that sly guy sailed through five hours of rude questions with barely a sweat – all that business about the bank he led foreclosing on the homes of thousands of struggling Americans, while he sheltered the wealth of rich hedge fund clients offshore. So 2014!

So what if he failed to disclose $100 million in assets and his position as director of a Caymen Islands corporation? We can totally trust him to handle the US treasury. Just make sure to check that guy’s pockets when he leaves the building!

Self-righteous billionaire white guys: check, check, check. If you were hoping for a bit of variety, some color perhaps, in the last cabinet slot, you’d be stupid. Join me in a hairball coughing fit welcome for Chicken Perdue, career politician and Big Ag CEO, plucked to direct USDA and the future of our food system. Hope you love those GMOs and pesticides.

Well, that’s a load. But take heart. The Swamp Creatures and their dreams still have to get through – drumroll please – the Democrats. Ouch, that drumroll was my forehead banging on the sidewalk.

And yet, I have hope. I do, I have it around here somewhere. I’ll let you know when I find it.

Until then, I’m rolling on down to the Women’s March this Saturday to spew my views about You Know Who. Watch for me underfoot and gimme some love.

Yours,
The Severed Head

How long does a severed head stay unconscious?

Not long enough my friends, not long enough. I'm rolling out of apathy to spew my views about the state of affairs in 2017. You'll thank me later, you really will.